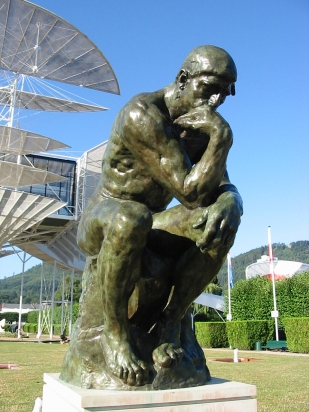 I think too much. I know I do, but I can’t help it. Even when I try to switch my brain off and do something mindless like watch NBA basketball, listen to the news or sleep, my brain is always moving in eighty-two different directions. There is usually a song playing in the background of my mind as I sit and try to do nothing, but fail. Currently, that song is Any Way You Want It by Journey. When there should be nothing going on in my head, there are voices whispering about my job, my marriage, my kids, story ideas, failure, the fear of failing, frustration at not being where I would like to be at this point in my life, all at the same time. It’s a true cacophony of noise. It’s like a real life Babble-onia.

Sometimes, one voice will be the loudest and will say, ‘hey, y’all shut it, so I can talk to the man here.’ Usually most of the other voices quiet down, with one piping up every once in a while with something like, ‘who died and made you the boss?’ That voice gets sushed quickly by the other voices and gets a mean eat crap and die glare from the main voice of unreasonable thoughts. When this voice finally has its say, it tells me things that frustrate me, most of them about my writing abilities or the lack of readership. That voice is a real jerk. I’ll call this voice Manny because it is so close to the childhood whining complaint, Meanie.

There is another voice, the main competitor for time in my brain with the other one. This voice is all philosophical and serious in a manner different from the first one. I will call this guy Phil.

So, Manny is the blowhard jerk who likes to tell me I’m crap. Phil is the thoughtful one, always with something to say about the world I reside in (both mentally and physically). Of these two guys, which would you say would be the one who irritates me the most? Go ahead. Think about it for a moment. I’ll wait.

Okay. What’s your guess? How many of you said Manny? Come on, be honest. Raise your hand or leave a comment below (I can’t see you raise your hand, but I can read your comments, so please feel free to leave one). Why did you say Manny? I can give you the reason I would have said Manny if I were in your place, reading this instead of writing it. Manny is a jerk. He is negative and somewhat of a bully, always putting you down and telling you that you suck. Honestly, that’s pretty accurate in many cases.

Though Manny is everything you think he is, he is not the one that irritates me the most. Phil is. Yes, that’s right. Phil is my thinking voice. He is the one who wakes me in the wee hours of the morning asking me questions I have no answers for. He is also the one who incites my temper and aggravations, points out the things I dislike about aspects of my life. He is as negative as Manny, but he actually points things out; he actually tells me exactly what’s wrong with the things I dislike in this world and why. He is, after all, a philosopher. He philosophizes. Is that even a real word?

Though more often than not, Phil angers me and puts me in a state of deep thought, he also opens my eyes to new ideas and a different way of seeing things. Some of his long winded thoughts have lead me to some of my best stories and characters. Hank Walker is one of those characters. Homer Grigsby is another. If you have read the stories those two characters are from, I hope you will agree that they are smashingly good.

The other night while in the shower, Phil popped his head in, silencing the other voices, though they all let out groans before going quiet. Even Manny grumbled about his appearance in my brain because he knows that once Phil begins to talk, I will listen to him before I listen to the others, including the Voice of Reason, or as I call her VORonica.

Phil stood up on his soapbox and lifted a finger in the air and began to lecture in a Scottish accent, bringing up some of my favorite terms: Word Whores, Paragraph Pimps, Wordgasm. He showed me how wrong I was about the definition of the first two terms and how, as a story teller I should strive to give every reader a wordgasm. Don’t ask what the first two mean. It’s quite complicated. However, the third term is exactly as it sounds: a wordgasm is what a reader should feel after reading a particularly good book or even just a particularly good portion of a book. It is the feeling you get after reading a story by someone that makes you say, “I really want something else by this author, and I’m willing to pay for it.” (It really is like having amazing sex. When it is over, you lay in bed next to your butt naked partner and say, ‘yeah, that is how sex should be every single time. You know it won’t be that way, but that is what you want it to be like.) You should want a cigarette after reading a book so good it gave you a wordgasm.

That’s not the most important thing Phil said as I showered myself clean. He said to me, “Stop worrying about those who don’t put any soul in their work. You do you and you keep putting your heart and your soul and your mind into your words and you’ll be okay.”

He paused as I rinsed the shampoo from my hair. I imagine he took a sip of whiskey, smacked his lips, then wiped them with the back of his hand. Then he spoke again.

“So many stories these days have no soul, have no heart, have no feelings. They are just words placed one after another and they mean nothing. They are zombies—shells of what they could be, put on paper. When they are read, they are forgotten. They mean nothing.”

Words like zombies. When he said that I pictured a person struggling to read a book, turning each page slowly, hoping for something to grab their attention, hold it and then squeeze their heart and suck the breath from their lungs; anything to give them a reason to continue on. I could see the eyelids dipping, dipping, closing, the sockets like hollows on the face; mouth open and a dribble of sludge falling from the corner of the mouth in boredom. Empty words with cracks and wrinkles and holes where there shouldn’t be any.

It reminds me so much of the song Words, by Missing Person that was released in the early eighties. One of the lyrics is as follows:

“It’s like the feeling at the end of the page

When you realize you don’t know what you just read.”

As a story teller, that is probably the worst thing a reader can say about your work. Not only did the words do nothing for you emotionally, you don’t even know—or remember—what you just read.

This is what Phil was telling me. And this is what I am going to tell you. If you are a writer, an artist, a singer, or whatever creative endeavor you take on, boldly put your heart and your soul into your work. Own your work as if it is the most important thing in your life. Own it as if it is oxygen and without it you can’t live. Whatever you do, don’t settle. Don’t do what everyone else does. Be you. Why? Because you don’t want anyone coming away from your work wondering what they just read, saw or heard.

My oath to every reader who picks up my books is to give you my best, my heart, my soul … to give you a part of me. As readers, if I ever give you a story you feel has no heart or no soul, you let me know. Contact me at 1horrorwithheart@gmail.com and let me know. Don’t be a jerk about it. I don’t respond to that type of behavior. On the flip side of that coin, if one of my stories or anything I write touches you, makes you think or feel, you can also contact me at that same address.

There is too little soul in stories these days. I won’t settle for that. I can’t. VORonica and all the other voices won’t let me.

As always, until we meet again my friends, be kind to one another.

5 thoughts on “Words and Soul”