The ground ate Ronald today.  He jumped from the tree we had climbed, landed on both feet and kept from tumbling to the ground by putting a hand on it to steady himself.

“Your turn, Gordie,” he yelled up at me.

I shook my head, not so certain jumping was a good idea. If I landed wrong, I could blow out my knee, break an ankle, or worse, smash my skull.

He gave me a boo-hoo and pretended to rub his eyes with his hands, “Quit your crying and jump, man.”

“I can’t.” I hated the whine in my voice. I hated feeling like a wimp. But that didn’t stop me from staying put where I was at in the tree, my butt perched against a thick limb, one hand hugging to the trunk.

Heat filled my face, shame filled my heart. “Am not.” 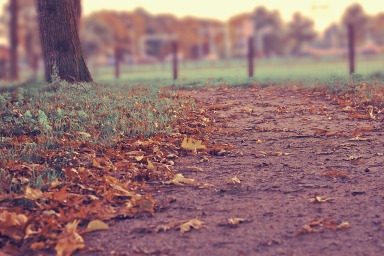 I started down, one foot on the branch beneath me, both arms holding the one I had been sitting on.

I tried not to listen, but he was right. It took all my courage to climb that high in the first place—heights and I never got along, but I had been afraid Ronald would pick on me, or maybe even beat me up if I didn’t climb the tree. He was mean like that.

Looking down, my head swooned. I thought I would fall, strike a few limbs on the way down and break my head open. My heart fluttered and my stomach rolled. I grabbed a branch with one hand and wrapped my other arm around it.

“You’re a big, fat chicken,” Ronald yelled back as I lowered myself to the bottom limb. I was about to lower myself further so I could sit on it and drop to the ground from there. Still, breaking an ankle was possible even from only about six feet up.

Then the ground shifted beneath him. It was like the earth moved under his feet. His eyes grew wide and he looked down. The grass parted and the ground opened up, sucking Ronald in to just below the knees. The ground closed just as quickly, like a teeth biting down on a piece of meat.

From where I was in the tree it looked like Ronald had been pulled into the ground by some invisible mouth. I scampered back up the tree, one branch, a second one, third and fourth, until I was back up as high as I had ever been, gawking down as the ground ate Ronald.  By then, he was thigh deep in the shifting dirt and trying to grab a hold of anything to pull himself up.

Too terrified to move, I could only watch. Blood appeared in the sand around his thighs and spread outward.

Waist deep, Ronald reached out as far as he could, clawed at the ground. His hand sunk into the earth, followed by his arm up to his elbow. I climbed higher into the tree, height and I no longer bitter enemies. I closed my eyes and clutched tight to the tree with both arms as I stood on a branch I hoped would hold me.

Ronald’s screams echoed in my ears for several seconds. Then he went silent. I glanced down. Ronald was gone. A moment later, the ground burped. It’s the only thing that makes sense—an earthly burp. One of Ronald’s shoes popped up from the dirt and grass, the shoelace still knotted, a bloody sock lying limp inside it.

Now I sit high in this tree, the ground beneath me; Ronald’s shoe and sock taunting me. I know if I jump down and try to run, the earth will get me too, maybe not as quickly as it ate Ronald—it’s had a dog and two squirrels since then. Occasionally, it burps, the ground shakes and a bone or some fur pop out of the dirt. Then it settles down and waits.

I think I’ll stay here a while. Maybe the ground will go to sleep. Maybe I really am a chicken.

Back in 2010 there was an anthology titled, The Elements of Horror. As the title suggest, all the stories had to be based on an element: Earth, air, fire, water and space. When I saw the call for submissions, I wanted to write a story based on each element. I thought it was plausible seeing how the word count was under 750 words per story. I ended up writing four pieces with the only element missing being space. Two of those pieces were published in the anthology, Eating Dirt being one of them.

I’ve since rewritten a couple of the stories, including the one you read here today. It’s short and simple and I hope you enjoyed Eating Dirt. Also, please comment on the post, like and share it to social media for me. I thank you from the top of my heart.